Thursday, Day 2 started with a lovely stroll through O4W (Old Fourth Ward neighbourhood)
We walked down Freedom Park Path and had breakfast at the Highland Bakery. 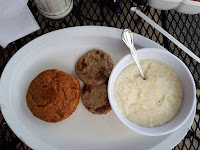 ﻿
I had turkey sausage patties, sweet potato biscuit and GRITS!
Grits! Something I never had ever before in my life but had read about them in my childhood books.  I always imagined them as a fried cake rather than a tapioca type consistency.  I liked them a lot and you will see from further posts this was not the only time I ate them on this trip!

From there we walked down the Beltline to Ponce City Market then on to Piedmont Park.  The Atlanta Beltline is a trail created where the train line used to be.  It was busy! The people of Atlanta use it a lot for walking, running, and cycling.  That is so great. 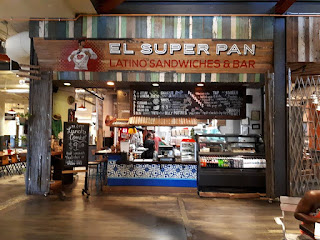 ﻿
Ponce City Market: this is a beautiful industrial style old building (which was originally Sears and Roebuck regional office, warehouse and retail store) turned into nice shops, eateries and bars. 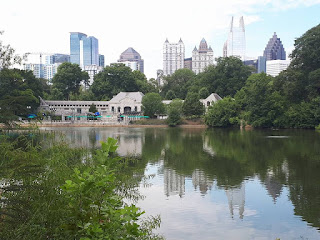 ﻿
I really liked Piedmont Park.  How beautiful is this view with the skyline of Midtown Atlanta  in the background. It was lovely just walking around and enjoying the warm weather (oh did I not mention the weather?! It was so beautiful the whole time I was there). 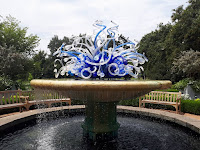 From there we walked to Midtown to the Atlanta Botanical Gardens which were soooooo beautiful.  I know, I'm using the word beautiful a lot...what can I say, a lot of Atlanta was beautiful! (or stunning, or amazing!).  Some more strolling around enjoying the gardens - and the lovely orchids in the glasshouse and the amazing Chihouly blown glass sculptures (pictured)

Bert then called an Uber for pick up to go to Candler Park where we went to the AMAZING Fox Bros BBQ for lunch. 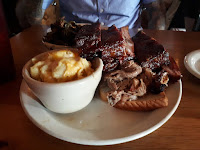 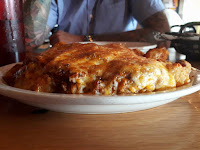 ﻿
This is "Lopez" - tater tots covered in brisket and cheese. Hellooooo! So fab.

The tour of Atlanta continued and we headed Downtown where we visited the Atlanta Central Library.  This is an incredible Marcel Breuer (Bauhaus architect) designed building.  It is brutalist in style (eek, I think) and spectacular. 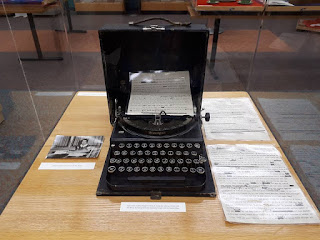 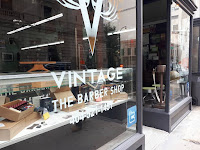 ﻿
Another super thing was passing by the barber where none other than world swimming champion Michael Phelps got his hair cut!

We walked to Centennial Olympic Park* which is a lovely park to sit and relax.  The Coca-Cola factory (museum), the Georgia Aquarium and the Centre for Civil and Human Rights are located here also.  Also located there are vending machines which supplied the coldest bottles of coca-colas ever :-) It was a hot day so it was lovely just to sit and relax and sip.  Admittedly we also were a bit done in from all that lovely food in Fox Bros!

*Centennial Olympic Park is also the site of the horrific bombing during the 1996 Olympic Games killing 1 person and injuring 11.  I am glad it is such a nice spot now and used by so many people - it kind of flies in the face of the hateful act that was carried out there and represents good overcoming evil. In my humble opinion, 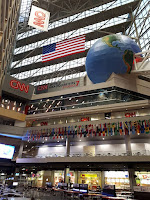 It is also very near the CNN building where Bert works.
We popped into the atrium for a quick look around when collecting the car (spoiler! I got a proper tour of the building on Day 4 - it was very exiting)

On the basis of being done in, that was enough driving for the day so next up was a nice drive through Midtown / Buckhead / Buford Highway.  Buford Highway is a very interesting place from a sociological perspective I thought.- famous for its ethnic diversity.  Have a read here for  more info. 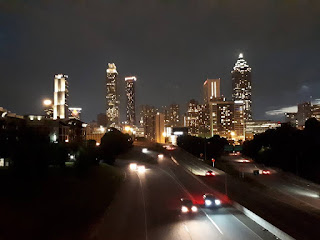 Last stop of the day!
This is the view from a bridge about 30 seconds from Bert's house which is quite famous because it is used in the tv program The Walking Dead.  I don't watch that show so I was not aware of it, but I've since googled it and the view, and it's very cool to think that I've seen it in real life!
Again - I feel very lucky :-)
You may have noticed that there is no mention of food since lunch in Fox Bros. And that is because we ate so much there that we didn't need to eat again for the rest of the day/night.
A good nights sleep and on to Day 3!
**For Day 3 click here**
﻿
Posted by AmyDublinia at 14:12