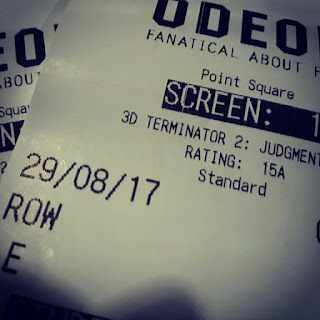 Yesterday (August 29th!) I went to see T2 in 3D with Enid.
It was amazing!!!  AMAZING!!!
It was so good it actually felt like a completely new film that I was seeing for the very first time.  And believe me this is not my first rodeo watching this film - when I was 15 I attended a summer camp/film and acting course, and  myself and two similarly sci-fi/action movie gripped young fellas watched it EVERY SINGLE day during our lunch break for TWO WEEKS solid.  Ever since then I have been pretty much obsessed with it - T2 and the original The Terminator films are in my Top 10 favourite film list. I see from a search on this blog my last mention of it was in a blog of February 2016.  Hmm, I am sure I watched it more recent than that, but I guess that is the last time I blogged about it.
I know a lot of people are not fans of 3D - and it has never really delivered all that it has promised (in some people's/real film buff's opnion).  But I just love 3D films!  And if there was ever a film that was made for 3D I think it is this one.  Some of the scenes from the beginning, you actually felt like you were in the tunnels with the resistance and part of the fight for the world.  The chase scenes felt akin to being on a rollercoaster - that you were actually on the motorbike with Arnie and Furlong.  And the helicopter scenes! You felt like it you were in another helicopter right alongside for the filming. You could almost reach and touch the T1000.
Oh and the furnace at the end,  you were so right there in the scene you could almost feel the heat.
And of course all the explosions - hey who doesn't love an explosion in 3D.
There was a bit of a funny (funny odd) moment at the beginning of the film where James Cameron welcomed us all and spoke about the film and the remastering etc. And then he goes "so thank you for visiting your local movie theatre in the UK to watch this movie"  At the mention of the UK the whole cinema literally took an intake of breath, collectively gasped and then ooohed slash kind of booed.  So it wasn't a full boo, and it wasn't too bad natured or anything...but still! Who the hell signed off on that!