Quite amazingly, even after the action filled previous day we were up and ready to go as early as ever.

Bert had something he needed to attend to that morning so while he was gone I took the opportunity to do the majority of my packing and arrange my clothes for the airport etc - which as it emerged later was handy that I had done so.

There is further good news in that while Bert was gone I do believe there was a thawing of relations between Biscuit and myself, and she may have warmed to me a tiny bit...to the extent that she was even following me around observing what I was doing.  However I made the silly mistake of telling her what a good girl she was and that was the end of that. I got a look of "waaaaggghh don't talk to me", and she backed off and disappeared for a while.  Ah well! It was good while it lasted :-) 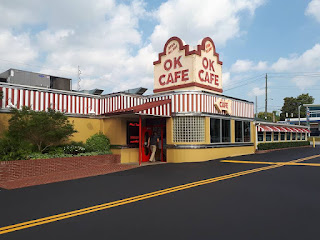 ﻿
So. Sunday morning! And my last day :-( Sure where else would you start but the OK Café in Buckhead - which is a very very cool mid century style diner. Bert, ever knowledgeable, told me about how it was recently burned down and details of the rebuilding process and some of the alterations they made - the colour of the wood being slightly lighter being one.

Food glorious food!  So my last day in the South I just had to order grits didn't I?!  These were different again from the other places I had grits - and while I thought they were seasoned very nicely (they were kind of peppery) I probably preferred the consistency of other ones.  But don't get me wrong they were still great!   I do like grits a lot :-) 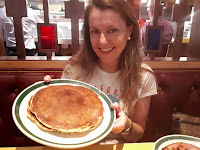 ﻿
And I got pancakes.  Two of them.  And when they came out they were only huuuuuuge.  Which was fine by me.  Holidays and all that.  It is no time to be thinking of diets when you are on holiday :-) 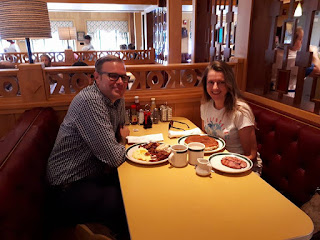 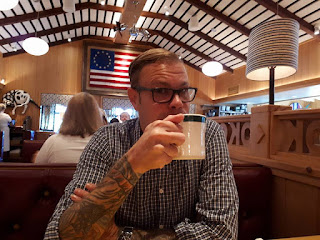 Oh God, it doesn't take much to make me happy :-)  I like this photo a lot - Bert drinking diner coffee, in a diner with it's name carved in to the booth dividers (see right of the pic), and the US flag in the background.﻿

So it was a fairly relaxed morning as you can see - a nice slow breakfast and coffee. I think the  original plan was to go out on bikes* on the Atlanta beltline which would have been fun.  *Bert had got a loan of a bike for me from a friend - thank you friend, I am sorry I didn't get to use it, but the loan was appreciated!

Anyway a change of plan and instead we went to see two AMAZING places!

First up we drove through Midtown and rounding a corner we came upon, omg, the Margaret Mitchell house!  How happy was I that I got to see it.  We had a good old poke around it - and considering it was closed (Sunday - it is not open until 12) I felt that I got the vibe and spirit of Margaret Mitchell.  How cool is to think that she wrote the epic book Gone With the Wind in that very house. 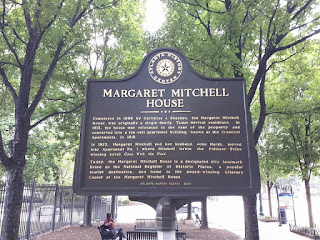 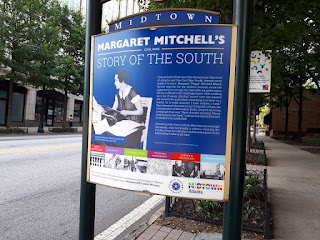 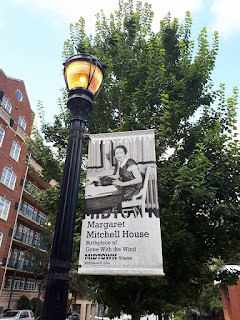 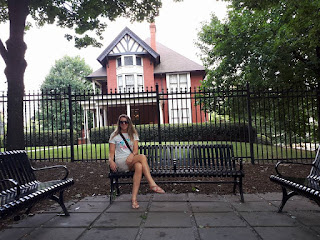 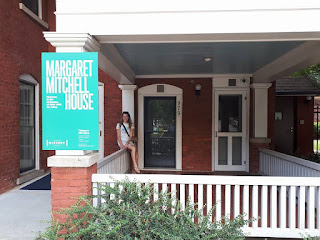 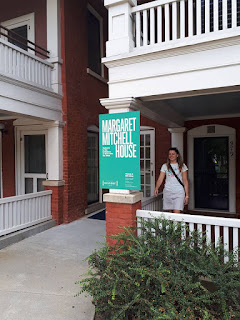 I'm laughing because I had just hopped over the balustrade and into the patio area for these photos! 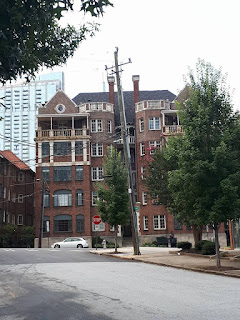 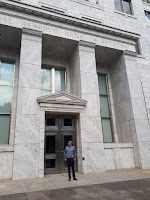 ﻿
We strolled around the area admiring the nice buildings.  In particular the Federal Bank of Atlanta which Bert said was made from Georgia marble.  That got me thinking about Irish Connemara marble from Galway/the West of Ireland which is a lovely greenish colour and used in Government buildings, but in small quantities and never a whole building.  Doing some googling now I see from the wikipedia page about marble that Georgia marble is  a notable marble, Irish however, is not!  Well there you go, that's me told.

From there we went on a nice drive to an incredible place.  We visited the great Stone Mountain which is a large lump of granite with a very cool engraving/relief on the side of - done by the same sculptor who did Mount Rushmore - of three Civil War Confederate leaders Stonewall Jackon, Robert E. Lee* and Jefferson Davis.

*Considering what has happened and is happening in Charlottesville, Virgina right now, and what in one part (amongst other things) stemmed, from the decision to remove a statue of Robert E. Lee, I am finding it a little painful thinking about the world we live in right now. So the less said by me the better.  I just find it sad the actions of some humans.  I also find a sadness in the irony of visiting the Center for Civil and Human Rights and being so impressed with how far we had come in the civil rights struggle and then you see this...
#onehumanfamily... why can't we just get along?? 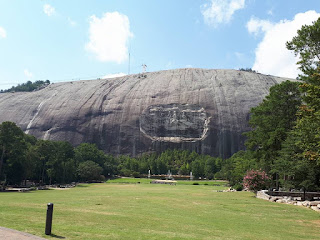 But that aside for now, I had a super time at Stone Mountain.  I was really thirsty so was going to get a drink in the gift shop but then saw a sign that there was a Coca-Cola Freestyle Machine up at the summit. Like hello how could you turn down the option of a crazy mix of  Coca-Cola at 1,686 feet above sea level!!!

We took the skyride/cable car up to the top.  Yes we got our mixed drinks.  Pictured below is  Bert explaining the intricacies of the machine :-D 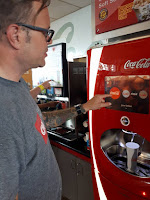 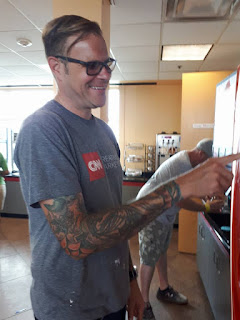 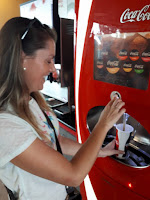 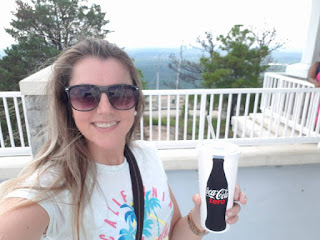 ﻿
I went for a Coke zero, mixed with about 20% vanilla diet coke and with a quick shot of lime diet coke to finish it off. It was goooood!!!  And I absolutely resolutely believe that it tasted better then it would at ground level ;-)
This photo was not planned this way but doesn't the cup in it look very cool?

Stone Mountain was busy!  Lots of families who had taken the skyride up and were just pottering around it (it was a bit like being on the surface of the moon), and very impressively a lot of people who hiked it up.  They looked healthy and fit, and kudos to them.  Actually that is something that I noticed (and mentioned it before about the beltline), from what I saw the people of Atlanta like getting out and exercising and making use of their natural resources. That's pretty cool to see. 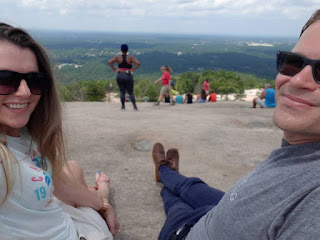 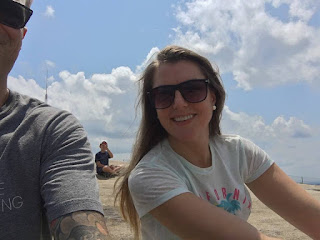 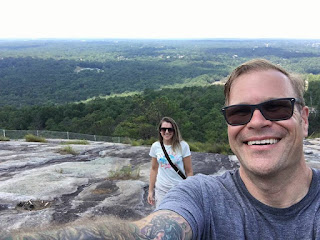 So we mainly just sat and admired the view (a bit of contemplating life in my head again also!).  The view really was quite spectacular - the mountain was surrounded by a large amount of beautiful forestry (hey, some might even say jungle...lol...private joke). And right at the edge of the expanse of green foliage, sparkled the beautiful midtown/downtown buildings of Atlanta. 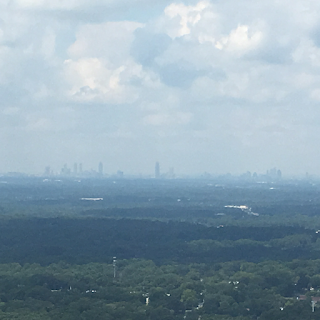 An interesting anecdote: Bert said that around the 1950's there was a campaign/advertising to market or brand Atlanta as "Oz" and that this was the first time he really understood it as he could see the city rising up out of all the green.  That kind of stuff is right up my alley and I thought that was really interesting...

Anyway (how impressive is this lol) we decided to forego the skyride down and we walked down!  It wasn't long - maybe 15 minutes - but it was most enjoyable.  While I would have preferred to be wearing pair of runners rather than the shoes I was wearing (flat strappy sandals) it was definitely the right choice!

Our hike however brought us down on the other side of the mountain from the car park so we had to walk about 15 minutes further back to the car.  Which was grand, it was nice just chilling along (um not a thought about the fact that I had a flight to catch i.e. time was ticking!).  We got back to the carpark but scooted back in to the visitors centre to look in the giftshop, take a few more photos of the carving and get a another drink in the giftstore (ahem, still no thought about the time of my flight!).

It cannot be understated how much fizzy drinks were consumed on this trip!
This Amy came from the gift shop :-)﻿ 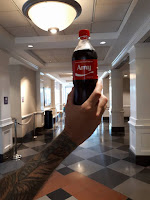 ﻿
We came out of the shop and while heading down to the car took a wrong turn and ended up in a little kind of fun park area which was full of kids and families, games and amusements, and some chillaxed country music.  As nice as it was just chilling along it was then we noticed the time and we figured it was time to get on the road and get to the airport.

There was no major panic, we were "ok" on time but I figured it would probably be best to check in online to save time in the airport, so I did that in the car - with a little assistance from Enid who what'sapped me my passport number.  You have to wonder what did we do before the internet at all??

So we scooted back to Bert's where my earlier packing and prepping stood to me and we had a quick turnaround and headed off to the airport. 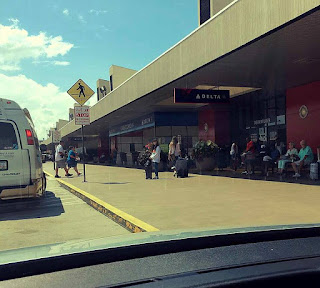 Ha ha ha! So I just adore this photo (zoom in, you can see me in the middle of the photo - Bert said he tried to get a closer photo but his hands were greasy from all the Southern food we had eaten. lol).
I just think there is something a little bit pitiful, and a little poignant, about this photo. You know me and they way I am a tad obsessed with saving things for posterity.  Well I just think this captures a moment in time so perfectly.  Loooooove it. 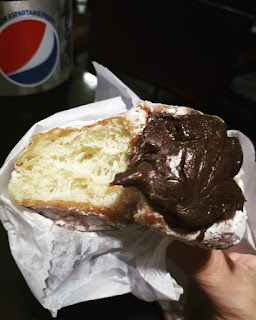 All I had time for before my flight was this amazing Dunkin' Donut which on the basis of not being able to get at home I treat myself to in every airport where I see one.  Last holiday hurrah!
﻿


﻿
Two great flights (Atl to JFK, JFK to Dub) and I was home.  With a bit of a bang I admit.  But with great memories to keep me going for a while.  It was a great trip.  I hope you can see that from my blog posts and enjoyed reading them!
And while it was goes without saying it's only right it's said again, thank you to Bert for all he did.
Posted by AmyDublinia at 11:50

Email ThisBlogThis!Share to TwitterShare to FacebookShare to Pinterest
Labels: Atlanta, Atlanta Georgia, things to do in Atlanta, weloveatl