Last week an ad for a screening of La La Land caught my eye on facebook which I thought looked really good.  Then as chance would have it Enid messaged me the very next day saying she had seen it and was I interested.  So I said I was and I also messaged Cousin Kasey to see if she was around and wanted to go.

As you know I absolutely adore La La Land.  I saw it twice in the cinema, borrowed it on dvd from the library and also watched it on the plane over to Oman earlier this year.  I wrote about it previously in my blog here.

I'd never been to an outdoor cinema, but Enid had (in Florida and in Sydney) and was telling us how even on really sunny days, once the sun went down it got cold.  So! Being Ireland and all we prepared on this basis.  We had chairs and blankets to wrap around us.  I wore my winter puffa jacket and yes, I wore a hat as you can see in the pic below.  And gloves!  I know this probably sounds a bit of an overreaction or over preparation but I'm a cold person...once then cold gets into me I am a goner. 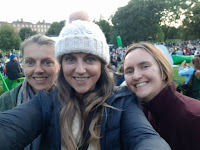 So I'm happy to report the night went great. It did get cold - but were lovely and warm (we did actually see people leaving early who had not put as much military precision into their planning.
And the film! The film of course was wonderful.  And it really whetted my appetite for my next viewing of La La Land - Enid and I have tickets for a showing in the Grand Canal Theatre (in September) accompanied by the RTE orchestra playing the score which I just know is going to be even more wonderful.
﻿
Posted by AmyDublinia at 13:45